MRS. GENEVA FOUNTAIN, age 75, of Dry Valley Road, Summerville, Georgia passed away Friday, October 29, 2021, at her residence, following a sudden event. A native Chattooga Countian, She was born on January 12, 1946 to the late Robert (Bob) and Bernice Smith Siffles. Mrs. Siffles was Holiness by Faith and was retired from House keeping from Oak View Nursing and Rehab. Center. She was preceded in death by her husband, the late Jessie Lee Fountain on August 12, 2013, sister, the late Margaret Siffles, brothers, the late Billy Siffles, Ray Siffles, Charles Ragan, Terry Ragan, Hollis Siffles.

MR. BRUCE EUGENE OWENS, age 69, of Rock Spring, Georgia, passed away Tuesday, October 25, 2021, at his residence, following a brief illness. Born in Lakeview, Georgia on March 31, 1952, He was a son of the late Hill and Lucille Waters Owens. Mr. Owens was a retired machinist for Roper Corporation and a Veteran of the U. S. Army.

Surviving are His sisters, Thelma McDaniel of Rock Spring and Wilma Bybee of Florida; several Nieces and Nephews.

MRS. DORIS BRAMLETT BOWMAN, age 87, of Whitley Drive, Summerville, Georgia, passed away Tuesday, October 26, 2021, at her residence. She was born January 22, 1934, at Watson Cross Roads, Alabama, a daughter of the late Grady H. and Tessie Burke Bramlett. A loving wife, mother, grandmother and friend, Doris was a hairdresser since her younger days, then worked as a switchboard operator for Chattooga County Hospital, a job she truly loved. She was one of the most kindhearted, generous, caring women and has missed her lifelong true love and husband, Evan Bowman, who passed away February 12, 2011. Doris would do anything to care for her family; she cooked a delicious Sunday lunch for many years, usually making two and three versions of the same dish to please different family members. She never met a stranger, enjoying conversation with everyone she met. Doris loved her Lord and Savior Jesus Christ, looking to Him daily for guidance; she belonged to Calvary Baptist Church all her adult life.

Earle Rainwater Funeral Home in charge of arrangements for Mrs. Doris Bramlett Bowman who passed away Tuesday.
Posted by Earle Rainwater at 8:01 PM No comments: 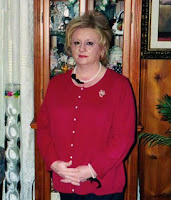 MRS. SHARON DENISE (SHERRY) MORGAN, age 64, of Scoggins Street, Summerville, Georgia, passed away Monday, October 25, 2021, in a Rome hospital. A native of Chattooga County, She was born on December 21, 1956, to Billy Joe and Betty Imogene Atchley Simpson, who survive. Mrs. Morgan was Baptist by Faith and was assistant Manager retired for Family Dollar Store.

Graveside service will be held Wednesday, October 27th, at 2:00 P.M. from the Summerville Cemetery with Pastor Steve Collins officiating; there will be no visitation.

Posted by Earle Rainwater at 3:22 PM No comments:

MRS. BETTY FAYE SIFFLES, age 71, of Martin Street, Summerville, Georgia, passed away Tuesday, October 19, 2021, in a Rome hospital. Born in Trion, Georgia, on March 17, 1950; She was a daughter of the late J. C. and Madeline Ledford Edgeworth. Mrs. Siffles was Supervisor for Lookout Mountain Transportation and a member of the Community Holiness Church. In addition to her parents, she was preceded in death by grandson, the late Braiden Fitzpatrick and brothers, the late Rev. Paul Edgeworth and the late J. T. Edgeworth.

Earle Rainwater Funeral Home in charge of arrangements for Mrs. Betty Faye Siffles who passed away Tuesday.
Posted by Earle Rainwater at 1:18 PM No comments:

MR. MARTY RAY GREEN, age 53, of Smith Rail Road, Summerville, Georgia, passed away Sunday, October 17th, 2021, in a Rome hospital, following an illness. Marty was born May 23, 1968, in Rome, Georgia, to the late Ray and Terresa Diane Shipp Green. He was Baptist by Faith, was self-employed in the Construction industry, and in addition to Parents was preceded in death by his brother, the late Joey Green on June 15, 1998.

Posted by Earle Rainwater at 3:11 PM No comments:

MR. JAMES MATTHEW FLOYD, age 46, of Back Berryton Road, Summerville, Georgia passed away Friday evening, October 1, 2021, in a Rome hospital. A native Chattooga Countian, He was born on June 17, 1975 to Mike and Jane Ivey Floyd, who survive. He was a member of South Summerville Baptist Church, was a graduate of Chattooga High School Class of 1993, served in the U. S. Army during Desert Storm, and was employed as a lab technician for Mohawk Industries. Mr. Floyd was preceded in death by grandparents, J. W. Floyd and Francis Bush Floyd and Johnnie and Gladys Ivey, father-in-law and mother-in-law, Robert and Wanda Prather.

Posted by Earle Rainwater at 8:12 PM No comments: