MRS. ELIZABETH R. WILLIAMSON, age 93, of Espy Street, Summerville, Georgia, passed away Tuesday, August 30, 2022, at her residence. She was born in Rustin, LA. on June 14, 1929, to the late Hubert and Irma Thacker Rogers. Mrs. Williamson was a retired Special Needs Nurse; in addition to Parents was preceded in death by her husband, the late Earl Williamson, a son the late William Bruce Taylor, and sister and brother-in-law, the late Trudy and Jim Ellett.

Surviving are Her sons, Russell Keith Taylor and Thomas Michael Taylor; several Grandchildren and Great Grandchildren, one Niece and one Nephew.

At Mrs. Williamson’s request she was cremated; a Memorial Service will be held at a later date.

MR. MAX RUSSELL BALDWIN, Sr., age 85, of Dry Valley Church Road Summerville, Georgia passed away Thursday August 25th, 2022 at his residence surrounded by his loving family. He was born in Summerville, Georgia on March 5, 1937, son of the late Archie R. and Annie Ruth Baines Baldwin. Mr. Baldwin retired in 1980 as a Major of the United States Army serving in Vietnam two terms and achieved Master Senior Aviator. He was a member of the Church of Christ. In addition to his parents, he was preceded in death by his sister, the late Gracie Ruth Hall.

Posted by Earle Rainwater at 9:21 PM No comments:

MRS. JANICE LEE (PATSY) WHITE, age 75, of Red Bird Lane, Summerville, Georgia, Teloga Community, passed away Sunday evening at her residence, following an extended illness. Born in North Carolina on April 25, 1947, She was a daughter of the late Raymond Deforest (Boog) Kirby and Josie Elizabeth Keef (Jo) Kirby. Mrs. White was former Director of Nutrition at Kennestone Hospital and a member of the Teloga Baptist Church. In addition to Parents, She was preceded in death by Her husband, the late Noland Dewayne White on July 4, 2021, and brothers, the late Steve Kirby and Michael Kirby. 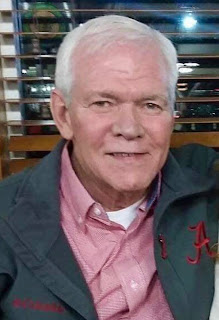 MR. ROGER HUGH DUKE, age 78, of Cave Spring, Georgia passed away Wednesday, August 17, 2022, in a Rome hospital. He was born in Hamilton, Alabama, on January 4, 1944, a son of the late George and Wilma Lois Markham Duke. He was a maintenance operator for a printing operation. In addition to Parents, He was preceded in death by brothers, the late Harold Duke, Billy Wayne Duke, and Larry Duke.

Funeral service will be held Monday, August 22nd, at 2:00 P.M. from Graveside in Greenhills Memory Garden with Pastor Jarrod Kinsey officiating.
Earle Rainwater Funeral Home in charge of arrangements.
Posted by Earle Rainwater at 11:00 AM No comments:

Posted by Earle Rainwater at 10:25 AM No comments:

MRS. DAPHENE J. ALLEN, age 98, of Walnut Street, Summerville, Georgia, passed away Sunday, August 14, 2022, in the local nursing home. Born on July 31, 1924, was a native of Jackson County, Alabama, and a daughter of the late Reuben and Effie Hilley Johnson. A member of South Summervile Baptist Church, Mrs. Allen worked for Montgomery Knitting Mill and retired from Oakview Nursing and Rehab. Center. In addition to Parents, was preceded in death by husband, the late Loren Howard Allen, son, the late Danny Allen, also three Brothers and two sisters died earlier.

Funeral services will be held Wednesday, August 17th, at 4:00 P.M. from the South Summerville Baptist Church with Rev. Gene Greer and Rev. Doyle Waters officiating with eulogy by Heather Eagle, interment in Greenhills Memory Garden. Active Pallbearers Kyle Kellett, Kylor Kellett, Hayden Eagle, Taylor Eagle, Jeff Pless, and Frank Winter; Honorary Pallbearers the Staff of Oakview Nursing and Rehab. Center. Visitation will be Wednesday from 2 until 4 P.M. at the Church. Contributions may be made to the South Summerville Baptist Church.

Earle Rainwater Funeral Home in charge of arrangements for Mrs. Daphene J. Allen who passed away Sunday.
Posted by Earle Rainwater at 4:09 PM No comments:

MR. JEREMY PAUL CRUMP, age 45, of Summerville, Georgia, passed away July 17, 2022, from injuries received in a pedestrian/automobile accident in the Pennville Community. Mr. Crump was born April 1, 1977, in Summerville, Georgia, a son of the late Debra McCauley and Gary Thomas Crump who survives. In addition to his Mother, He was preceded in death by grandparents, Anna and B. D. McCauley, Bessie and C. G. Crump.

MR. LAMAR W. RICH, age 73,  received his wings July 31, 2022 while residing in Marshalltown, Iowa; he was formerly of Trion, Georgia.  He was born in Trion, Georgia on November 29, 1948 to the late William (Bill) and Pearl Potts Rich.  He was retired from the Public Works Department of Chattooga County and as Pastor of Ark Of Faith Church in Lyerly, Georgia.  In addition to his parents, he was preceded in death by a son, the late Dale Lamar Rich, a sister, the late Rosey Rich, and brothers, the late Fred Rich and William Rich.

Earle Rainwater Funeral Home in charge of arrangements for Lamar Rich who passed away Sunday.

Posted by Earle Rainwater at 3:03 PM No comments: