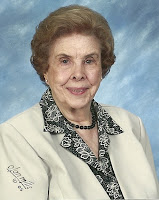 After a long and joyous life, Elizabeth Gravlee Wilks passed away on November 1st at a family residence in Summerville, Georgia. Longtime resident of the Birmingham area, Mrs. Wilks was predeceased by her husband Robert Hobson Wilks. Mrs. Wilks is survived by her son Robert Bradley “Bob” Wilks of Birmingham; her daughter Nell Wilks Farrar and son-in-law Arch Farrar of Summerville, Georgia; two grand-daughters, Challis Elizabeth Farrar Latta with her husband Andy Latta of Gainesville, Georgia; and Mary Catherine Farrar of Summerville, Georgia. A descendant of the Gravlee-Nalls and Newton-Chambliss families of Fayette County, Elizabeth Gravlee was born on November 9, 1921 in Newtonville, Alabama. She graduated from Fayette High School prior to entering the University of Alabama where she earned her Bachelor of Science in Home Economics Education Degree in 1944. Her career in education continued for many years as she taught high school classes in home economics in Fayette County, Talladega County and Jefferson County. In 1968, she was named Supervisor of Vocational Home Economics for the Jefferson County Board of Education, and began a career in which she thrived and maintained high standards for the vocational home economics departments. Always growing and learning, she earned her Masters of Arts in Teaching from the University of Montevallo in 1973. Following her retirement in 1987, Mrs. Wilks continued to enjoy her fellow educators through her membership in Delta Kappa Gamma. She also found time for travel abroad as well as to famous locations in the United States. In addition, she enjoyed time with family, friends and church groups. She was a longtime resident of the Altadena Valley area and member of the Lakeside Baptist Church. A memorial service was helds Saturday, November 3rd at 11 o’clock in the morning at Earle Rainwater Funeral Home located at 10355 Commerce Street, Summerville, Georgia. Family received friends in the hour prior to the service. Interment was at Memory Hill Cemetery in Albertville, Alabama immediately following the service. Memorials may be made to the charity of one’s choice or to Lakeside Baptist Church, 2865 Old Rocky Ridge Road, Birmingham, Alabama 35243. Earle Rainwater Funeral Home was in charge of services.
Posted by Earle Rainwater at 9:25 AM