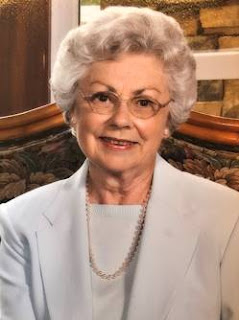 Elizabeth (Betty) Lott Thomas passed away on February 18, 2021 in Nashville, TN, following a brief illness, in the presence of her family. She was born July 25, 1925, in Hoschton, GA to Zella Pirkle Lott and Lester Judd Lott. Her childhood, partly spent on a dairy farm, was full of love despite times of economic hardship as the country entered the Depression.

Betty graduated from Berry College in Rome, GA in 1946. She said that her first night at Berry, she was more homesick than any time she could remember, but the next day began a wonderful adventure. At Berry, Betty was active in theater, playing Jo in the school’s production of Little Women. And when the yearbook photographer left school for the Army, she stepped in and took and developed all the yearbook pictures. After graduating from Berry, she stayed for a year as the assistant to the Dean of Women. During that year, she met Malcolm Thomas, a Summerville native who had recently returned from military service. Betty and Malcolm were married in 1947 at Berry’s Frost chapel.

Betty and Malcolm settled in Summerville with their son Steve, and later welcomed the arrival of daughters Celia and Carol. Their lives in Summerville were marked by deep ties to family, church, and friends. Gatherings at Lake Weiss filled many summer days, with picnic baskets, life jackets, and folding chairs set out for visiting. Betty submitted to gentle pressure and learned at the lake to waterski but liked to say that the best part was that she never had to do it again. Betty became a teacher when Carol entered school, and fifth and sixth grades were her calling. She was dedicated and loved by her students, and after retiring she took pleasure in being approached by former students with a warm hello and thank you. She and Malcolm enjoyed traveling after they both retired and their trips sometimes began with “Let’s go to Dover (Air Force Base) and see where the next ‘Space Available’ flight is headed.” When that once resulted in planning for Switzerland and winding up in Greece--not a good climate match--she said that was half the fun.

She was a devoted partner, supporting Malcolm when he became ill and grieving his loss. Betty was a woman of deep and abiding faith. Her church became especially important to her after Malcolm’s death and she was a founding member of Horizon Baptist Fellowship. She especially connected with the social ministry of the church, actively participating in providing food and responding to other critical needs in the community. She also warmly welcomed visits from her children and grandchildren, and always greeted their arrival with fresh brownies which did not last long. When, in 2011 Betty moved to Nashville to be near two of her children, moving away from that Horizon community was perhaps the hardest part. But she was lovingly welcomed and took great joy in being near family. And she appreciated the caring community she found at Park Manor/Abe’s Garden where she lived.

Betty was unfailingly gracious. She exhibited a warmth and caring that was remarkable for its consistency and genuineness. She was loath to speak ill of anyone and pinned to her kitchen bulletin board decades ago a poem called “The Critic,” which cautioned against criticizing others because their circumstances were not fully known. Betty was a beautiful woman who understood that true beauty comes from within.

Betty is survived by her children Steve Thomas (Jeanne) and Carol West (Olin) of Nashville and Celia Thomas of Alexandria, Va. She is also survived by her grandchildren Jim Thomas (Sloan), Clayton Thomas, Robert West (Rachel), and Emily West of Nashville and William Martindale of Washington, D.C., and step-grandchildren Tracy Brockhouse (Zach) of Portland Me., Hunter West (Jinanne) of Nashville, and Charlotte Middleton (Shane) of Reston, Va. Great-grandchildren are Holden and James Thomas, and step great-grandchildren are Annabelle and Elliott Brockhouse, Annelise, Hollis, and Anson West, and Austin and Tallin Middleton, as well as numerous nieces and nephews. She is preceded in death by her husband Malcolm Thomas, her parents, and her siblings Robert Lott, Jane Verdel, and Sarah Townes.

The family will have a graveside service. There will be a memorial service to honor Betty’s life at a later time when it is safe to gather. Those who wish may direct a memorial contribution to Horizon Baptist Fellowship, 1216 HWY 114, Summerville, GA 30747. Earle Rainwater Funeral Home in charge of arrangements.
Posted by Earle Rainwater at 9:41 AM